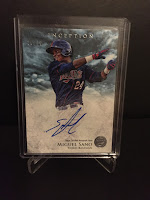 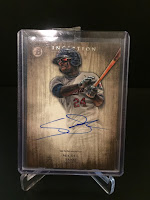 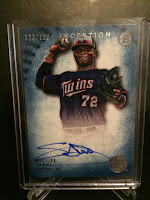 Welcome back for another edition of A Very Simple Idea!  I am so thankful for anyone who has taken the time to read any of these posts and especially for the feedback I have been getting!  Any and all feedback is welcome as I want to continue to grow as a writer/blogger.

This week’s research was another example of why I love this project so much.  To me, I had never heard of Miguel Sano before last baseball season.  He made his debut in July of 2015, but it did not register on my baseball radar.  I had no idea what his journey through the minors entailed, how hot of a prospect he was, and how exciting of a player he would become!  It’s really a joy to dig in and see all this in my research!

There are not many players that appear in three sets of Inception (Jose Berrios is the only other one I can think of off the top of my head); so I am happy to bring to you some info about a guy whose Major League career was a long time in coming!

Like a good number of players in the Inception sets, Sano was born in the Dominican Republic and signed as 16 year old with the Twins in October of 2009.  I was unaware of this until a couple of days ago, but apparently Sano is featured in the 2011 documentary called “Ballplayer: Pelotero.”  I know it used to be available to stream on Netflix, but no longer!  It seems merited, as Sano immediately became the Twins No.4 ranked prospect and the 94th ranked prospect in all of baseball!

Here is a quick progression of Sano during his time in the Minor Leagues:

Homered in his first at bat in 2010.  At the end of 2011 he was a Baseball America Minor League All-Star, ranking as the top prospect for the Twins and jumping all the way to the 23rd ranked prospect overall.  In 2012 he won the award for the Twins Minor League Player of the Year and moved to the 12th ranked prospect in baseball.  Sano was invited to play in the Future’s Game in 2013, starting at third base and batting fourth!  By this point he was the third overall prospect behind fellow Inception subjects Byron Buxton and Oscar Taveras.  He missed all of 2014 because of Tommy John surgery on his right elbow, but rebounded well enough to get his call-up on July 2, 2015.

To me, that journey epitomizes the path of the Major Leaguer.  I think it speaks volumes about Sano that he began as a 16 year old kid and worked his way up through just about every level of the Minors, establishing himself and then thriving, before earning his spot on a Major League roster.  I just respect that a lot.

In my research, the comparisons I saw that jumped out to me about Sano were with Adrain Beltre (surefire Hall of Fame candidate) and Giancarlo Stanton!  Why?  One word: power.
One scouting report I read said that “Sano is first and foremost a power prospect, with some scouts even giving him an 80 on the 20-80 scouts scale.”  That’s amazing.  Over and over again I saw praise for Sano’s ability to hit the ball very, very hard.  Even when scouts criticized Sano (“HIs play was careless and inconsistent at times throughout the last couple of years…and he needs to strive to make improvements to his defense and plate discipline in order to blossom into an elite player”), there is no criticizing his power potential.

It comes as no surprise then, that Sano was invited to the Home Run Derby this year and made it all the way to the finals.  Then of course he was Judged and found lacking…

Either way, I am more excited about following Sano for the rest of his career now.  I am highly impressed with what I have seen and read about him!

One of the first things I realized as I look at the 2013 Inception for Sano is that I just can’t deny that I love the dark jersey on the dark background of this set.  Every card in this set that has that combination just makes me happy.  I can’t give an analysis as to why for the most part, I just like it.  Though I do not like how in this particular picture, the white pants he is wearing disappear a little too completely.  To me it seems to throw the picture off balance more than the typical Inception card.

The next thing I notice about this card is that I do get a sense of the power tool that I read so much about.  Admittedly, observing the card AFTER reading so much about his power undoubtedly influences how I see it.  But it’s still there.  It’s not hulking, raw power in the way of Judge or or guys from the Steroid Era.  Really it’s a lithe, compact, athletic power showing in this follow through.  The look on his face is not one of effortless concentration.  Instead I see his face as an outlet for the power surge that he just uncorked.  The back hand coming off of the bat also reminds me of Griffey Jr…something I used to emulate as a kid.

In the 2014 card, Sano is definitely a little thicker and filled out.  The overall impact of the card is very similar to the 2013 version, but there is much greater sense of control.  The follow through is not nearly as wild, but the strain on his face is evidence of the power being pushed into the swing.  Somehow, again, the coloring of the jersey on this card meshes perfectly with the background; the fading on this card works so much better than the white-on-white of the 2013 card as well.  And for me, the coloring of the sunglasses just adds a “cool factor” to the card as a whole.  In looking at the two cards side by side, I feel like Sano did a lot of “growing up” in the year between the two photos.

The 2015 is honestly one of the most awkward cards that I have seen in any of the sets.  In it, Sano is a fraction of a second from unleashing a throw, presumably to first base.  But it has none of the control and ferocity of any of the pitchers I have looked or the fluidity of any of the infielders I have seen thus far.  The strain on his face in this card does not belie the power of a hit took, but of a guy struggling to get the ball to go where he wants it.   The angle of the card makes it look almost like he is leaning back and the angle of his arm in the picture is just awkward.  I am sure if the perspective were different or if it were taken seconds before/after it would be a much better card.  Overall just a poor presentation of a very good player.  What must he have thought when he was signing these cards?

As I peruse eBay for cards that I do not own, I am always struck when an unusual number of parallels are available for a player, or when his relic/auto is more readily available than the regular card.  Such is the case with Sano and has been for as long as I can remember.  Very interesting phenomenon in my experience.

Posted by JakeSchornick at 9:14 AM