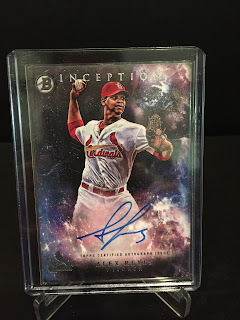 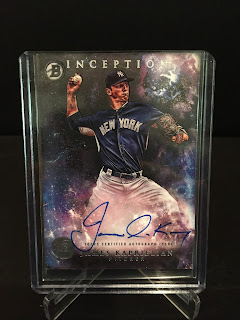 Today is Monday, July 3rd.  At 4:30am I got out of bed and began the process of prepping my Kamado Joe grill for my first ever attempt at smoking a slab of brisket.  It seemed only fitting that once the meat was on the grill, I turn my attention to another American passion, baseball.
This week I want to focus on two different players in the same set for the first time.  For me, going outside the norm means finding a connection or theme as opposed to just pairing two random guys.  Today’s pairing is Alex Reyes and James Kaprielian. What connects them? Two highly touted pitchers that will not see the mound in 2017 due to Tommy John surgery.  The sub-connection is that they both missed time in 2016, but for very different reasons.
Reyes first came on to my radar at the Future’s Game in Sand Diego last season.  He was the starter and was whistling heat for the first two innings, even touching 100mph!  It was very impressive!  But I had not heard of Kaprielian until a friend of mine @bigpandacards send me his 2016 Inception.  Both players seem destined to do big things in the Big Leagues, IF they can stay healthy and (in Reyes’ case) clean.  Here’s hoping they both live up to the promise we have seen so far!

Let’s start with Reyes, since he did actually get some time in the Big Show last year.  Reyes grew up in New Jersey but moved to the Dominican Republic in 2011, and was eventually signed by the Cardinals as a non drafted free agent.

Going into the 2013 season, Reyes was already ranked by Baseball America as the No. 7 prospect in the organization.  In 2014 he jumped to No. 2 and did everything possible to justify that ranking, keeping it as he headed into 2015. It looked like Reyes might be on the inside track for a spot in the MLB in 2016, but he failed a drug test for the second time at the end of 2015, missing 10 games followed by 40 games to start 2016.  Despite the setback, Reyes came in to 2016 as the top prospect in the organization, earning a start in the Future’s Game and an eventual call-up to the Cardinals on August 9th, 2016.

What about Reyes made him such a prolific prospect to this point? This quote from Baseball America when it was announced Reyes was being called up puts everything into simple perspective: Aside from touching 100mph, “he’s consistently in the high 90s.  The curveball has 12-6 shape and flashes plus, and the changeup is gaining in consistency.”  Pretty much exactly what you want in a Major League pitcher.

In the minors, Reyes struck out 449 batters while issuing only 179 walks.  In his Major League debut he struck out Adam Duvall and proceeded to get 51 more Ks in only 11 more appearances while issuing only 23 walks.  Obviously, Reyes has the skills and stats to keep the baseball world salivating for his return hopefully in 2018!

As for Kaprielian, he was “arguably the most polished arm available in the 2015 draft.”  In 2012 he had been drafted by the Mariners in the 40th round, but opted to play at UCLA, winning a National Championship in 2013.  He finished his career fifth in career ERA and sixth all-time in strikeouts at UCLA. This garnered the attention of the Yankees who took him  16th overall.

The scouting report on Kaprielian is pretty impressive:

So it seems Kaprielian took a leap forward as he moved up in competition, but cannot stay healthy. He missed most of 2015 with flexor tendon issues and in April it was announced he would miss 2017 to undergo Tommy John surgery.  He has only appeared in 8 games over the course of his career (in short season ball after being drafted then all of last season) because of his health issues.  Again, I am the type of guy that really roots for potential to be lived up to, so I really hope both of these guys can get healthy, stay healthy, and give us fans something exciting to watch in the years to come!

I laughed when I started actually looking at these cards because I was not aware how similar they were when I chose them.  Both cards show the pitchers in the moments before they unleash a pitch towards the plate.  Both have the glove tucked and ball locked up the upright position prior to being fired home.  In general they both have an “eh” feel to them as far as Inception cards go.  The white of Reyes’ jersey stands out against the dark background much better than the Yankee jersey of Kaprielian.

I think the best part is that the facial expression on both is awkward, though Kaprielian definitely takes the cake for looking strained.  Admittedly, Kaprielian looks like he is trying a lot harder and thus there is a lot more coloring and shadowing on his card than with Reyes, so it would get points in that category if this was a competition.

Both guys get style points in my book with the signature because of the contrast of big initials and smaller lettering for the rest of their names.  Again, if I was comparing, I would give the slight edge to Kaprielian because it has more of a classic feel to it with the full name being a little more distinguishable.  I can’t really complain much about either though, they both looked like the players were actually paying attention while signing and not half asleep.

I really wish I had sales data for Reyes that goes further back than the last three months.  There is no way that the recent card values represent what it looked like for him late last year or pre-Tommy John surgery this year.  Here is the breakdown:

Thanks for hanging with me on the first of the themed blog posts!  I would love to hear what you think or if you have ideas for how to connect players in different ways!

Posted by JakeSchornick at 11:05 AM