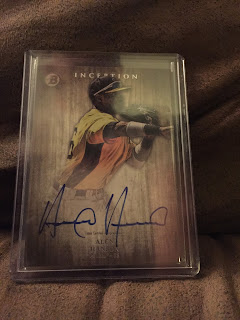 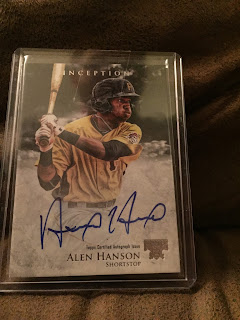 I have really enjoyed the opportunity to research and write about these cards over the last couple of months!  Admittedly it’s difficult to find time to fit in the research and the writing, but every time I finish and post an entry it’s a really awesome feeling!

That having been said, I am always looking for ways to improve this blog.  I am trying to make the entries a bit shorter and more readable, and also changing up some of the ways I approach each entry.  For instance, this week I chose a player who has cards in both the 2013 and 2014 set.

I also think that next week I will deviate from the base sets and profile a player from a sub-set of the Inception brand…stay tuned for that!

One of the most interesting things about my research lately has been looking at the International Signings from the same year that the player I am profiling signed.  Alen Hanson signed with the Pittsburgh Pirates out of the Dominican Republic on July 14, 2009.  Here is a list of guys you may have heard of who also were signed from the International Pool that same calendar year: Aroldis Chapman, Miguel Sano, Jurickson Profar, Jorge Alfaro, Max Kepler and Gary Sanchez.  That’s a crazy good top of the crop of International Signings!

Among those players signed that year, Alen Hanson was far from the most heralded but also has not been a major disappointment.  He was 16 years old when he signed and has slowly progressed his way through the Pirates’ system, earning his shot at the Major Leagues in May of last year.  In 27 games, he batted .226 (with a .273 BOP) only striking out five times and stealing 2 bases.  It was not a sizzling debut (like his International Signing classmate Gary Sanchez), but it was progression enough to keep him moving forward.  This spring, Hanson has hit .373 with a .404 OBP and 3 stolen bases.  Spring Training stats are what they are, but obviously he is showing continued signs of growth.

These are all great things about a guy who has mostly been known for his speed (“speed is clearly his main offensive weapon” according to one report).  In 2012, when Hanson finally began to realize some potential in Class A ball, one publication proclaimed him “the best prospect no one knows about.”  Here are some other things that were said about Hanson leading up to the 2013 season:

Indeed, going into the 2013 season, Hanson was the Pirates’ #5 ranked prospect in their system.  Even though he dropped slightly in succeeding seasons (down to #6 going into 2014, then #7, then #9 as the 2016 season started), it is hard not to attribute a good portion of the fall to the rise of other prospects in the system as opposed to lackluster play on his part.

Some other facts of note for Hanson:

Here are some of the numbers that Hanson accumulated during his time in the minors:

If you are like me and gloss over chunks of statistics like this, note that he stole 205 bases in his Minor League Career.  It’s not exactly Billy Hamilton numbers, but definitely a skill that will help him stick around in the Big Leagues.  The career .281 batting average is not exactly eye-popping, but if it can translate to the Majors then I imagine it won’t be hard for him to end up as a mainstay in a lineup.

It appears that Hanson has performed well enough to merit a spot on the Active Roster for the Pirates coming out Spring Training.  Hopefully he continues his growth and progression and becomes a useful player for them for a number of years!

One of the more exciting opportunities of profiling two cards of the same guy is that this time around, the cards show different  aspects of his game.  The 2013 Inception shows Hanson in his follow through of a swing and the 2014 cards depicts a play in the field.  Excellent!

To begin, the yellow Pirates jersey just looks awesome against the cobalt background of the 2013 card. The folds down his shirt created by the twisting of his torso provide some awesome contrast of light and dark that really just make this card pop.  And even though the helmet he is wearing isn’t actually reflecting the background of the card, its not hard to feel like it is.  In short, the color scheme of this card really fits together well!

As for Hanson himself, there are really three things I notice when I look over this card.  The first is - unsurprisingly - his eyes.  I love how they are obviously tracking the ball after he has gotten a hit.  It’s hard to imagine a card where I player is captured after swinging and missing - so I am going to assume that’s not the case here - and I just really like seeing the calculations going in his mind by how he is tracking the path of the ball.  Knowing his speed, that leads to the second thing I notice: how his body is transitioning from the swing to running.  The body mechanics it takes to do that smoothly have always been fascinating to me, and in this picture I can see a glimmer of the speed that scouts have raved about for years.

And finally, I notice his cheeks.  I am not sure what the word is for the involuntary motions that go on during something as complicated as hitting a baseball, but they have always been interesting to me.  Full disclosure, I know that I blow out my cheeks with my lips pursed just like Hanson is in this picture when I throw the ball.  I have no idea if I do it when I swing, but that’s a major reason that feature jumped out at me.

In the 2014 card, Hanson is still wearing a yellow Pirates jersey that still manages to look good on the wood grain background, but definitely not as cool as it did for the 2013 card. One random thing I notice is the slight peek we get as the number on his back.  It’s a small detail that I think helps make this card look good because it enhances the realism of the player on a card that seeks to capitalize on an ethereal effect (good luck figuring that sentence out!).

The position that Hanson is captured in for this card really intrigues me.  Obviously he has just made a throw, but so much about his body position seems odd.  His hand is turned outward and his elbow is torqued upward, almost as if he has thrown a screwball.  It seems that the picture was taken very late in the follow through when most of the arm has rolled through, but it just seems off.  And his glove is up by his face, which seems an unnatural place for it to be at this point in the play.  My best guess is that this picture was taken on a double-play execution, instead of a play on a grounder or other possible defensive play.  Maybe someone who has played Second and Shortstop can enlighten me a bit on this!

Finally, Hanson’s signature for both years is pretty consistent.  As I said before, I am a big fan of the big first initial for the first and last names, and Hanson does this to perfection.  The flourish at the end of his name, the loop back over the last few letters is fun.  It’s not efficient and doesn’t exactly seem to flow naturally from the final “n” if I was writing the name, but it’s fun that he does it and is consistent with it!

As I said above, I am always looking for ways to improve on how I present the information that I find.  Since I am going two cards this week, I thought I would try to show it a little differently.  Here are the figures on both cards - the current set of listings and sales information at my disposal:

Of note for me is that, in my experience, when a player has cards in multiple years, his earliest card is almost always more valuable.  This would not appear to be the case with Hanson.  Even though the cheapest sale was his 2014 card, the highest sale was ALSO his 2014 card.  Fascinating.  Granted, it’s not like anyone is breaking the bank for his Inception card - the 1 of 1 printing plate could probably be had for less than $100 with the right negotiation.

Overall, Hanson is a very intriguing up and coming baseball player and I am very happy to have secured both his 2013 and 2014 Inception cards already!

Posted by JakeSchornick at 7:20 AM