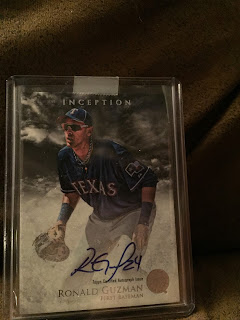 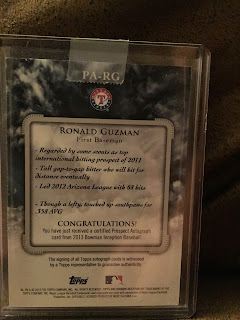 I had a lot of fun reading up on and writing about Jose Abreu last week!  I have been thinking about some other ways to change up the format in small ways to keep it interesting for the five or so of you who take the time to read this!  So please, stay tuned!

This week I went with a guy whose name I have heard a lot over the last couple of years with the Rangers, but never knew why.  The only thing I knew about Ronald Guzman was that he was big.  At 6’5, over 200 pounds, he definitely sticks out!  And as someone who was (almost) always put on first base because I was the big kid growing up (although one year in particular I remember playing with older kids and got put in right field most games…), I can imagine Guzman probably dealt with the same scenario.  After researching him, I am even more convinced that he has been a first base stalwart since little league!

Ronald Guzman was part of a banner class of International Signees back in 2011.  Some of the names you might recognize from that year: Darvish, Mazara, Cespedes, and Leonys Martin.  At the time, Guzman was a 16 year old high school graduate with a body that scouts were hoping would fill out and become a mainstay in the middle of someone’s lineup.

It is now Spring Training of the 2017 season and Guzman has not yet made his Major League debut, although there has been serious discussion on whether or not he deserves a chance to play first base for the Texas Rangers.  With Mike Napoli signing this offseason and Joey Gallo still looming ahead of him in the pecking order, it seems Guzman is destined to be stuck in Round Rock for the foreseeable future.

In all honesty, the only thing that scouts saw as a real plus for Guzman coming out of the Dominican Republic was power.  The following quote was the common refrain I saw about him:

The one other are where Guzman is above average is his plate discipline.  Even after 5 years in the Minors, this is a common description of Guzman:

So what gives with Guzman?  Power is always valued in the MLB, so if he grades so high with power, why not give him a shot?  Here are his basic stats since joining the Ranger’s system:

Having a ceiling of turning into Adrian Gonzalez (another guy who could not get his career going until AFTER leaving Texas…) is nothing to sniff at.  One can only hope that Guzman will continue to improve and give us all the opportunity to see that raw power develop at the Major League level!

Knowing that most Inception cards try to get the player’s profile down to their knees - and given that Guzman is 6’5” - it makes sense that the card depicts him playing defense, bending forward in preparation for a pitch being thrown.  In my opinion, this was a poor choice for displaying Guzman for a number of reasons.
First, Guzman is known for his power and the overall impact of his size. The bent over position highlights the leanness of his frame (notice the jersey hanging loosely around his mid-section and how narrow his legs are in the light-gray-pants-on-light-gray-background).  Nothing about this picture connects with the scouting report of a raw power hitter.

Second, the only thing Guzman is known for is his bat!  Again, I understand some of the physical dynamics of putting such a tall player on a card like this, but it makes no sense to me to highlight a guy for his bat but put him on a card with a glove in his hand.

And to come back to his legs, the left leg is at such an awkward angle due to the lighting and the fading into the bottom of the card.  It really looks like his legs are two different sizes.  Just not a fan of this decision at all on the part of the card designers.

I have no problem with, and honestly even like, how Guzman only used the “R” of his first name then went straight to his last name with a quality “G.”  And I love the addition of his jersey number with the signature (just a personal quirk that I like).  I wish I knew was the big looping flourish was at the end, though.  I can’t imagine that it’s an “n.”  Maybe it is supposed to be the “z” in the middle of his last name?  Curious.

As much as I like ballplayers and sunglasses (what kid playing baseball in the late 90s didn’t want a cool pair of Oakley’s to wear out on the field), the fact that his mouth is hanging partially open just cracks me up.  It gives the opposite impression of the focus and intensity of so many of the cards I have looked at so far.  That’s not to say he isn’t focusing or isn’t fully locked in, but the appearance just does not have the same effect.

All-in-all, while I with Ronald Guzman all the best with his career, I cannot say that I am a huge fan of the way he is presented on this Bowman Inception card.

The landscape of Ronald Guzman’s Inception card is very much consistent with his projections as a player: limited but with a glimmer of hope.  For the most part, asking prices and sales prices are low, though by no means is his card a bottom of the barrel Inception.

The Ebay listings range is as follows:


One thing stood out, was that since it’s release, there have been 135 sales of the card on COMC.com.  No doubt that many of these were sales of a small number of copies that were bought and relisted without ever going into the possession of the buyer, but it’s still the highest number of sales of any of the cards I have looked at thus far for this project.  And I have no idea why other than the small glimmer of hope that Guzman unlocks his power and finds his way onto an MLB roster soon.

Posted by JakeSchornick at 11:16 AM