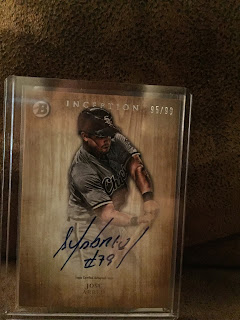 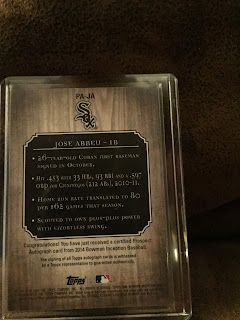 My apologies for missing last week to the three of you that read the entry two weeks ago!  I imagine you were incredibly disappointed!  Now that I have that off my chest, I’m going to try and make it up to you with some thoughts on this week’s card: the 2014 Jose Abreu Gold Parallel.

I went with Abreu because, as a player he intrigues me with his potential power and average combination, and as a person he fascinates me because of what he has gone through.  More on that in a bit.

Another reason for choosing this card is because he never set foot in the minor leagues.  So my normal narrative of a player’s march through the Minors as they reach for the Majors will not suffice here.  Instead, the plan is to look at Abreu’s impressive Cuban League (Serie Nacional) career, which landed him a very nice MLB ready contract to play with the White Sox in 2014.  There is quite a lot of information from Abreu’s time in Cuba, but I’m going to try and filter it down to what is most interesting to me.

So without further rambling, let’s get to it!

Abreu’s baseball story begins in 2009, where at age 21 he ranked eighth in Serie Nacional in home runs (19) and slugging percentage (.630). It was during this time that Abreu was teammates with another well known Cuban player (and Inception veteran) Yasiel Puig.

The next three seasons all proved over and over the legitimacy of Abreu as a all-around excellent ballplayer.  At the plate he did much more than mash home runs (he was first or second in the league all three years in batting average), even when he missed 1/3 of the regular season with a shoulder injury!  For the sake of name-dropping, 2012 was also the year he became teammates with the now Number One overall prospect in the MLB (and current White Sox prospect): Yoan Moncada.

During all of those years, Abreu was a consistent and constant force for the Cuban National Team in tournaments all over the world, including the World Baseball Classic, Baseball World Cup and Pan American Games.  It was not uncommon to see his name listed as a finalist of, if not winner of, MVP for all of those tournaments.

By this time, Abreu had drawn massive amounts of attention from the MLB, and on October 29, signed an amazing six-year, $68 million contract with the Chicago White Sox.  If only it was as cut and dried as that!

In August of that year, Baseball America reported that Abreu had left Cuba and would eventually make a major impact on the MLB free-agent market.  Why eventually?

“Abreu will have to establish residency in another country, have Major League Baseball declare him a free agent and the U.S. government’s Office of Foreign Assets Control (OFAC) clear him to sign…”

Also according to BA, scouts from the MLB were “extremely familiar with Abreu.”  These are the types of things that were written about him at the time:
Obviously, there is no question as to why Abreu’s arriving in the Majors was causing big time excitement!  And that, to me, is where the story gets most interesting.  Without going too much into the weeds, the idea that I am sitting at my kitchen table on a laptop computer typing a blog about pieces of cardboard seems absolutely absurd when juxtaposed with what the rest of the world deals with on a typical Monday.  I bring this up because of the recent headlines surrounding Abreu when was called to testify in the case of Bartolo Hernandez and Julio Estrada being charged with smuggling players out of Cuba to play internationally.

The headlines all focused on the fact that Abreu decided the safest way to dispose of the fake Haitian passport was to consume it with a beer.  The details are all a part of the case, but the charge is that Hernandez and Estrada (along with Amin Latouff) helped Cuban ballplayers defect from the country (via smuggling) and establish residency in Haiti before they can legally sign elsewhere.
Once Abreu was able to board a flight to the United States, he was informed that the fake passport would not pass the test to get him into the United States, so he needed to get rid of it.  He was foiled in his plan to put it in the airplane trash and thus ended up eating enough of the passport to avoid it being detected as fake.

All of this because he had to sign the contract with the White Sox by October 29th.  All of this to go from making $20 per month playing baseball, to over $10 per year playing baseball.  The details of the story and his journey are just astounding.  I won’t go further now, but the point is that the fact that we get to see Abreu play just about any day on MLB tv is a fact we should not take for granted!

To wrap up, Abreu has been far from a disappointment in the Major Leagues.  His accumulated stats are as follows:

In 458 games, he has wracked up 537 hits, 91 home runs, 101 doubles, 308 RBI, 137 walks with a .299 batting average and a .360 on base percentage.  Not exactly the Ruthian-type numbers he put up  in Cuba, but definitely impressive for a guy who didn’t step into the Majors until he was 27 years old. I could list his many awards, acknowledgements and honors, but in the end, it’s enough to admit that Abreu is just simply and excellent baseball player.

Of the parallels in this set, the Gold Parallel is not my favorite, but also not my least favorite.  I admit I have not inspected many other examples of the Gold Parallel outside of Abreu, but I do believe the dark colors of the White Sox jersey really stand in a nice contrast to the bright pop of the Gold coloring on the background.

When I look at the photo of Abreu, my eyes are drawn to two spots immediately: the forearm muscle on the his left arm running up to his elbow and the muscle of the right shoulder bulging up through the jersey.  As someone who spent countless hours trying to develop those two areas in high school weight rooms, I can appreciate the beauty of his raw power and strength in this photo.

If you have read more than one of these profiles, you know that one of my favorite things to look at in the pictures is the eyes of the player.  Even though Abreu’s eyes are not exactly visible, the downward scope of his face and the rigidity of the facial muscles suggests a player locked in on the ball hitting his bat.  Everything about this picture screams “solid contact” to me.  And even though his muscles are tense and obviously twitching to achieve their purpose, the photo does capture the sense of “effortless swing” described on the back of the card.

As for the autograph, I am honestly not sure what to make of it.  The first thing I like is that he took the time to write “#79.”  When a player takes the time to write anything in addition to their name, it suggests to me that they care about it more than as just an obligation.  The name itself though, is quite the puzzle.  Maybe there is something I am missing, but I can hardly pick out any part of his name other than what I believe is the “breu” in Abreu.  But I could be wrong.  Regardless, I think it looks cool!

The valuation of this card is another curious thing.  Because Abreu came into the league with such hype and delivered (by being Rookie of the Year), his card value was at one time extremely high.  But since he has not been as hot of a commodity in the last two seasons, there has been a major drop in demand and thus overall sales.  Yet, some of the prices of this card, both the Gold Parallel and the base version remain absolutely astounding!

Here is the breakdown:

So it’s really amazing the vast difference between listed prices and actual sales ($179 for a card that sells for under $25?!?).  Obviously this could be attributed to someone just not managing their inventory much, or simply someone believing that the card will indeed be worth this much some day.  Good luck with that buddy!


Once again, I leave my time of research and writing filled with high hopes and expectations.  I think Jose Abreu still has more to show us, though whether that is with the White Sox or as a commodity traded to a contender for prospects remains to be seen!

Posted by JakeSchornick at 5:34 PM