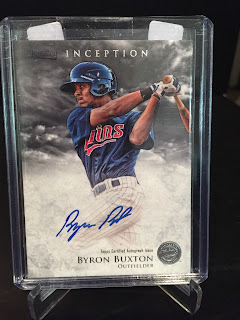 Well, honestly I did not mean to go with Twins players in back to back weeks.  But I have been looking for a chance to write about Byron Buxton for a while now.  It is especially interesting to me though, now, looking at his career when juxtaposed with Miguel Sano from last week.  Whereas Sano seems to continue to rise, Buxton just cannot live up to his pre-draft billing as “the next big thing.”

The funny thing is that, at first, it seemed like the Astros had made the wrong call by going with Carlos Correa as the first overall pick in the 2012 draft instead of Buxton.  Buxton’s minor league career started off hot while Correa’s was not so amazing initially.  But as the great Michael Scott of Dunder Mifflin Paper Co. once said, “My how the turn tables have turned.”

If you pay attention to baseball at all, you know the gist of Buxton’s story.  He was the No. 2 overall pick behind Carlos Correa, has tantalized scouts and fans with his athleticism for years, and has yet to made good on the promise he once posed.  He debuted in June of 2015 and has kept fantasy baseball players on a roller coaster ride ever since.   And because that story is so well known in the baseball work, I really just wanted to look at what was being said about Buxton before the draft and early in his career, and what’s being said now.

Here are some quotes I found that were published before and after the draft back in 2012:

Given these takes by scouts and people’s whose jobs it is know these players, it’s not hard to imagine how high the expectations really were for Buxton.  And at first, he delivered well.  By the mid-season report of 2013, Buxton was ranked as the top prospect in all of baseball.  He was also selected as a starter in the Future’s Game.

But here we are, 4 years after that Future’s Game.  Even though Buxton is still only 23 years old, the future is just not as bright.  On scout wrote at the beginning of this season:

It was actually surprising that I could not find a lot of analysis as to WHY Buxton has struggled so much.  Maybe there is some stuff behind paywalls that I cannot access, but for the most part people have just written Buxton off as an almost-failure.  So I asked Scott Welsh from the “In This League” fantasy baseball podcast for a summation of Buxton’s problems.  Here is what he had to say:

In the end, the common refrain is that there is still time for Buxton to figure it out.  Here’s hoping he does!

It’s funny how often this week’s profile makes me think of last week’s!  Whereas all three of Miguel Sano’s cards showed different perspectives of the player, both of Buxton’s cards show roughly the same moment of action.

Each card shows Buxton finishing the follow through on his swing, and in each photo his hands are finishing higher up than is typical in these kinds of pictures.  The look on his face and the position of his front leg is practically the same on each card, which I guess is a testimony to his consistency (there is definitely a joke there about consistently letting down his team…).  Even the color scheme is consistent with Buxton’s cards; the blue jersey for the cobalt background for the 2013 card and the gray jersey for the woodgrain background in 2014.  I am honestly not really sure what to make of that other than the card makers must have really liked that look on Buxton.

The autographs are pretty interesting to me.  The first one is so tight and small; it seems a little out of place for someone with as much fanfare as Buxton has had.  I really expected his autograph to look more like the 2014 version, which has more loops and a little bit more flourish.  I feel like a discussion of what a guy’s autograph means about the player would fit in perfectly in one of the early scenes of Moneyball.  Not sure there is any merit to it all, but it’s fun to think about.

There was a time when it seemed that nobody would take less than $30 for any Buxton Inception (2013 or 2014).  Obviously that was when the prospect of his success was still sky high.  Even though a lot of asking prices still remain high on the Buy It Now listings, the auction listings show just how far he has fallen in terms of card value.


Check them out on Facebook and eBay!
Posted by JakeSchornick at 5:04 PM