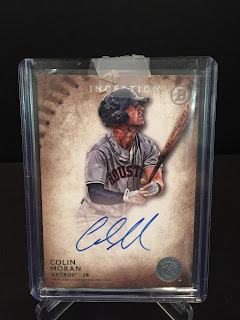 Welcome back!  I know I apologized last week for doing two Minnesota Twins in a row, but that actually inspired me for what’s to come these next few weeks.  Houston Astros.  Three in a row.
So get excited.

This week I decided to look at Colin Moran; both because he got his first call-up of the year (second chance in his career at the Majors) and then immediately took a foul ball to the face which necessitated a trip to the DL.

Reading about Moran was a reminder of why I love this project so much.  I really had no idea about who he was before being drafted and what it was that made him such a potential prospect.  Part of it is because he played at North Carolina.  I have a bias against UNC baseball because they benefitted from one of the worst strike three calls in the history of the College World Series; a call that essentially eliminated my Rice Owls from the last time they had a shot at winning the CWS.  Obviously I still haven’t let go of that.

Information about Moran really starts with his junior year at UNC.  That year he batted .345 with 13 HRs and 91 RBI, earning All-American honors and recognition as a finalist for the Golden Spikes Award. He lost the award to a guy named Kris Bryant, who you might see profiled on this site some time in the near future.

Why was 2013 the real breakout year for Moran?  Because 2012 was the beginning of an interesting pattern.

He broke his hand in 2012 and missed most of the season.  In 2015, Moran had his season completely thwarted by a fractured jaw suffered by an errant throw while sliding into second base.  And just now in 2017 he fouled off a ball and fractured his face.  This guy can not catch a break.

Moran was drafted 6th overall by the Marlins in the 2013 draft but was a part of the trade that sent Jarred Cosart to Miami and also brought Jake Marisnick to Houston in 2014.  At the end of that year he was already ranked the No. 7 prospect for the Astros.

The scouting reports on Moran all said pretty much the exact same thing: he has a very high Hit Tool, and everything else is average.  I read that over and over again.  Here is a good example from one source of what everyone was saying about Moran in 2013:

Honestly, people in general seem to not really know what makes Moran successful.  He just keeps getting it done despite working with average (or worse) tools overall.  It’s truly fascinating.

Despite the injury plagued career (even before July 22 of this year), and a really bad 2016 overall (he went 0-13 to start his career when called up last year), Moran was still a top 20 prospect for the Astros and got a second shot at the Majors when Carlos Correa went down with an injury. Sadly, it was in his second game that he fractured his face (it’s really fun to type that even though I feel really bad for him and can’t imagine how much it hurt).  Here are Moran’s career stats for his two cups of coffee in the Majors:

Moran’s appearance on his 2015 Inception card seems to really mirror his potential as a baseball prospect.  There doesn’t appear to be something super special, yet it’s obvious he is a ballplayer.

My eyes are immediately drawn to the lack of an outsized feature.  There are no tightly wound muscles, no super intense or goofy looks on his face.  Even in this picture, his follow through looks as though it was an easy swing that made smooth contact and he is just watching where it will fall.

The fact that he is wearing the blue sleeve and white gloves is a unique feature that I like, just something that I have not seen in many of the Inception cards. It’s especially interesting as I follow his right arm in the sleeve, down to the two gloved hands and then up the unsleeved arm.  Really interesting balance of colors.

His signature is one of my favorites among the recent profiles for sure.  All I can make out are “CLM,” but they are clean and crisp.  I like it.  The flow of the letters is like his hit tool, smooth and easy, very clearly getting the job done.

So unsurprisingly, Moran's card value is pretty low on the whole.  I was surprised to see that the 1/1 parallel recently sold (and for probably less than $100).  What was more interesting to me was that you can buy the entire rainbow of the set except for the 1/1 on COMC.com for about $40 including shipping!  So if you are a big UNC fan or think Moran really has a shot, now is your time to strike!  Just don't injure yourself clicking on the Confirm Purchase too quickly...

Posted by JakeSchornick at 7:16 AM