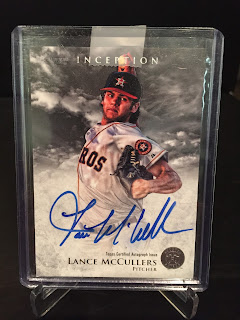 Another week, another Astro profiled!  This week, it’s everyone’s favorite curveballer, Lance McCullers!  McCullers was one of the very first Inception cards I owned, thanks to @jstephens2482 a little while back!  Little did he know what a journey he was sending me on!  So a big thank you to him!

When reading up on Lance McCullers, I kept shaking my head as I realized just how much people knew about him long before I did!  Honestly, when I first received the card I had never even heard of McCullers.  He was still a little way from taking his place in the Majors.  But I am so glad he did and so glad I have this card!

Before I go on, I want to give a huge Thank You to Gibson Sports Memorabilia for their support of this blog!  Because of Josh and what he is building at GSM, I have some great stuff headed your way on this blog!  I am also partnering with them for some opportunities to continue writing and exploring the collecting hobby in brand new ways!

Just reading about McCullers’ early accolades was really fun.  Obviously he is the son of a former Major Leaguer, so some of that comes as no surprise.

According to MLB.com, McCullers was the 2012 Gatorade National Baseball Player of the Year going 13-0 with an 0.18 ERA and 140 strikeouts.  The following organizations all named McCullers as a High School All-American: ESPNHS, Baseball America, Rawlings, Perfect Game, MaxPreps and Louisville Slugger.  And the year before, he had been named the Jackie Robinson Award Winner as the country’s top rising senior.

So why was he drafted 41st overall (the same exact spot in the draft that his dad was drafted)  and not higher?

The simple answer is that scouts saw a lot of talent and a really good arm, but they did not know if he had that “It factor”; that something that would put him over the top.  One scout wrote shortly before the draft that McCullers looked to be a No. 3 type starter, or that he could be a bullpen workhorse along the lines of Brad Lidge or Francisco “KRod” Rodgriguez. It’s interesting to note that that same scout added “as long as McCullers stays healthy.”

Here are a few quotes about McCullers from scouting reports:

So really it just seems like the baseball world wanted to watch and wait to see if McCullers could pull off being a Major League son of a Major Leaguer.   I’d say the proof is in the pudding.  Despite battling the anticipated injuries, McCullers has flourished since being called up in 2015 (going 4.2 innings, with 1 earned run and five strikeouts against Oakland in his debut) and was an All-Star in 2017.

Here’s a quick look at McCullers’ stats in the Majors. Note that he has averaged over one strikeout per inning in his career.  Not quite Jose Fernandez stuff, but still pretty awesome:

There is a lot to like about the look of this card, but one thing in particular I don’t like: his hair.  I know it’s the cool thing for ballplayers to have the long, bushy hair coming out of their hat right now, but I am just not a fan.  Since being called up to the Astros, McCullers has been very clean cut and stylish, so I imagine he probably saw this card and knew he had to change the hairstyle!

Now that that’s out of the way, let’s look at the good aspects.   One thing I really like about this card is the balance.  If you notice, McCullers is holding the ball up in the air, fairly close to the middle of the top of the card.  And if you draw a line down the card from there, you get a sense of how balanced McCullers is at the moment before he unleashes what appears to be a curveball or some other off speed pitch with movement.  You can see his thumb tucked under the ball and his two fingers straddling the seem; this is not a fastball.  Maybe somebody with a better eye for pitching can correct me if I am wrong.

The look on his face is another example of what I believe to be collected confidence: McCullers has absolute faith in where this pitch is going to go.  It isn’t an intense, laser focused look, but it’s also not lackadaisical.  It’s what I imagine Greg Maddux probably looked like for most of his pitches.  The strength and force of the upcoming pitch is foreshadowed by the taught muscles in the forearm of his glove hand.  That’s what betrays the violent force of nature known as McCullers’ curveball that’s coming.

One final note about the card: the style of his signature tells me that this is someone who practiced his signature as a kid.  This is completely surmising, but as a kid with a father who played in the MLB and has a name that doesn’t flow well in a signature, I imagine Lance spent more than a few minutes as a kid mastering the pen strokes of his John Hancock. I like the jagged look of all the up and down strokes in contrast to the big loop of the opening L.  Very cool.  I would love a chance to watch him do this in person some day!

This week,  I am changing up the last segment of the profile.  Instead chronicling the value of the card in the few ways I can, I want to try and get into the mind of the player I am profiling.  Try to find some way to make him more relatable to me and the people who read this.  I got some really good feedback regarding the post about Mark Appel and how that resonated with people.  Most players will not be so open and honest about their inner lives, so each will I will try and find something unique about the player.

One of the things I had heard a long time ago in passing was that the Astros targeted McCullers specifically for the spin rate on his pitches.  I found an article on USA Today about the science behind spin rates and how McCullers immediately bought into the analytics of spin rate with the Astros.

When asked about using the data, he responded by saying “I thought it was real cool from the get-go.  Some guys, they throw 90, and they throw fastballs by everybody. And you’re like, ‘How does that happen, when I’m throwing 95 and I’m getting my fastball hit around the park?’ Or, ‘Why are some guys’ curveballs better than others?’” It’s clear that McCullers has a very solid mental approach to the game.  Even though an early scout called him more of a thrower than a pitcher, it’s obvious that McCullers set out to be a pitcher in every sense of the word.

One of the worries, of course, is the possibility of overloading a player’s head with statistics, scouting reports and other things that cloud the mind and get in the way of focusing on the next pitch.  To this McCullers said “I’m not overthinking anything,” he said. “This is concrete stuff. It’s not ten different opinions given to me, where I have to kind of go through and decide which I want to run with. This is 100% accurate stuff that has been proven to work, and that’s why I’m so excited about it.”

You have to love a player who combines talent with preparation, always trying to be better and willing to be coached in new and unique ways.  Definitely makes McCullers worth following…if he can stay healthy!

Thanks again to Palmetto State Sports Cards for their continued sponsorship! Please check out their inventory at:

Posted by JakeSchornick at 6:18 AM