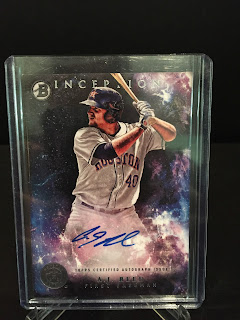 Welcome to the third installment of a three week look at Astros players/prospects!  Colin Moran and Lance McCullers were a lot of fun to learn about, and AJ Reed has been no different!  Admittedly, I knew nothing about AJ Reed except two things before this week: he has the potential to be really, really good…and he has not been good with his opportunities at the professional level.  After spending some time learning about who AJ Reed is and where he comes from, I can honestly say that I am rooting for him even more!

Reed won the Golden Spikes award in 2014 as the top overall player in college baseball - a year after fellow Bowman Inception alum Kris Bryant won it.  That alone speaks volumes about his talent and potential, but it was the more personal side of Reed that I wanted to know more about.  And it took some digging to get there!  More on that down below!

A quick word about the sponsor for this blog.  What was formerly Gibson Sports Memorabilia has officially changed to Palmetto State Sports!  Josh has been very gracious in his support of this blog and my collection.  Please give him and his website a look at www.palmettostatesportscards.com and on Twitter at @PalmSportsCards.

AJ Reed is the type of player whose accolades and accomplishments have been chronicled time and time again. So for the most part, I am going to let his statistics speak for themselves.

Note the continued trend of Reed being a solid contributor offensively all the way through the Minor Leagues, but thus far not even coming close to fulfilling his potential in 47 games at the professional level.

The scouting reports were the same for Reed at any given time, for any given level: excellent bat control and patience at the plate, great power, great arm, great defense, not a threat on the base paths due to size.  The player he was most closely compared with that I saw was Cubs First Baseman Anthony Rizzo.

This last quote does a pretty accurate job of summing up the AJ Reed we have seen and the AJ Reed we hope to see: “He may be part of a platoon as he enters his first big league season, but at some point soon, if not now, Reed will be ‘the man’ at first base. He has that much to offer. Once he assumes his role at first base, I don’t think he’ll be replaced anytime soon. But there is one caveat: beware the strikeouts. They will occur.”

Reed’s 2016 Inception card is another one that does not stand out in any way that I can tell. The only real quirk is his signature, which is legible but definitely on the side of being a “tight scribble.”  I can make out the A, J, R and what I assume to be the final D at the end of Reed.  Just seems to stand out as incongruous with the player and picture on the card.

Reed’s stance in the photo is very balanced and poised. From the top of the card to the bottom there is good symmetry in his positioning.

There is no deep coil or post-swing flexing of muscles in the picture.  His hands are raised high with the bat, fairly relaxed and ready to swing.  I do notice the placement of his front shoulder under his chin; that was where I was taught to put my chin in Little League because I kept opening my hips and shoulders too far and missing too many pitches.  His eyes are fairly squinted, so it’s hard to get a read on what he is feeling or thinking.

Overall it seems to be a solid card for a solid player.  Nothing that stands out or gives away his immense propensity to hit the baseball; maybe it’s a good symbol of his professional career thus far?

Trying to find out more about AJ took a little bit more time than with McCullers or Appel.  It took quite a few articles about Reed before I found one that even had a quote from him.  He does not have a Twitter account as far as I can tell and I have no desire to go check Facebook or any other social media.

For a while it seemed that all the world knew about AJ Reed was his immense baseball talent.  But as I dug into some articles from the end of his time in college I found out two things about AJ Reed: he is a great teammate and is very close to his mother.

An interview with his college coach from Kentucky, Reed was described as “someone who is fun to be around,” “willing to listen” and “does what you ask him to do.”  His coach even said he “has a self-deprecating side to him,” which I interpret to mean that Reed does not see himself as above his teammates, or that he has let his success go to his head.

In another video interview that I saw from the beginning of his junior season (the season he won the Golden Spikes award), Reed admitted that the year before he had tried to do too much on his own.  He had been mostly about pulling the ball and hitting home runs.  Going into his junior year, though, he credited his teammates with being very talented, able to get on base and capable of stringing hits together to form a top notch offense.  There was no hint of "it's all about me.”

Of the prospect of becoming a high draft pick and earning a huge paycheck, Reed said "I'm really excited about that (but) it's not really about the money for me," Reed said. "It's just about getting a chance to play pro ball and working my way up and making it to the major leagues. That's been a dream my whole life. So, you know, the money is great and having a million dollars is great, but my ultimate goal is to play in the major leagues for an extended period of time.”

That's really good stuff to hear about a guy who has accomplished as much as Reed has.

More importantly, I feel, is that Reed is very close to his mother - she moved to Lexington when he signed with Kentucky in order to be able to see all of his games.  After draft night,
Debbie Reed said: "It was very exciting that he did so well, just a pleasure to watch him play," she said. "On the other hand, every game that he played I knew it was getting closer and closer to that time. Once his last game was over, it was a bad night. I cried just about all night long."

She is unable to work due to a severe case of diabetes.   Reed admitted to reporters that even though the money from a big league contract is not a big deal to him, it does mean he has a greater opportunity to take care of his mother. If that’s the person he really is - and I have not seen anything to the contrary - then he is a guy I will root for all the more in the coming years.  I hope he sticks with the Astros and does great things!


Check them out on Facebook and eBay!
Posted by JakeSchornick at 6:31 AM