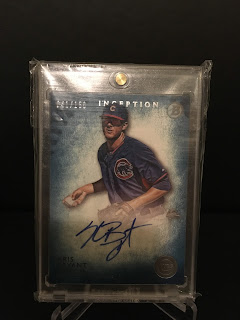 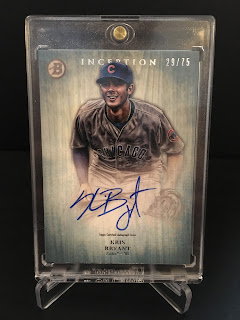 This post comes to you - much to my delight and surprise - thanks in large part to Palmetto State Sports Cards!  I have tried to start writing about players only when I have all of their Inception cards (which will mean Aaron Judge will have to wait a while…I only have 1 of his 3 base Inception cards!).  The 2014 Bryant was one of the last two I needed to finish the 2014 and was able to acquire one off of eBay.  Then out of nowhere, Josh as Palmetto State Sports Cards up and made sure I had the 2015 Bryant to really get my 2015 set going.  A huge thanks to Josh!

Having two Kris Bryant autographs is really an awesome thing in my book.  It is guys like Bryant, Mike Trout, Bryce Harper and others (maybe Judge and Bellinger?) that I know I will never really be able to get many cards of (or autographs) because so many collectors are after them.  In general, they are way out my price and range.  So I groaned thinking about going after both the 2014 and 2015 Bryant to complete the sets.  But having them both now is truly an awesome part of my personal collection!

Since Bryant is such a well-known baseball commodity, I plan on spending a very short amount of time on his stats and focusing more on the section about Bryant as a person.  I have come to really admire Bryant and hope for the best for him. Even if he is a part of one of the biggest “what-ifs” in recent baseball history: What if the Astros had drafted him instead of Mark Appel in 2013?!?

A good chunk of today’s profile is inspired by Tom Verducci’s article about Bryant from Sports Illustrated on March 21st: Born To Win: Is the Kris Bryant story too good to be true? No, but the Cubs will take it.

Here is how the article starts off:

Instead of going into Bryant’s ridiculous record of statistics, I just wanted to give you a timeline of how things have gone for him over the last five years:

I would venture to say that these two Inception cards do not capture at all the greatness that is Kris Bryant, elite baseball player.  Both, I believe, were very odd choices for a guy who was very clearly in the fast lane to stardom in Major League Baseball.

The first thing that comes to mind when I look at the 2014 Bryant Inception is “The Sandlot.”  The way that he appears to be straining to look in at the developing play makes me think “Squints” which leads me directly to the movie we all know and love (don’t bother pretending you don’t love “The Sandlot”).  I think it probably has something to do with the position of his mouth in the picture too; it’s not tight lipped but it’s not exactly in full “smile” mode.  It’s sort of half a look, whatever look that may be.  And as for the signature, I don't know how he decided to use what looks like a cursive capital “x” in place of his first name, but it still looks cool.  I love the big B and clearly defined T at the end of his signature.

One note about 2014 Bryant Inception cards.  I do not know specifically why, but it appears that a base version of this card was never released.  I do not know if some were made but had errors, or they were made and never signed or any other possible explanation.  If anyone has any insight, I would greatly appreciate it!  So what I have is essentially the base card, the /75 parallel.  I think it's pretty cool , to be honest, that I have one of only 75 of these made!

In the 2015 version of the Bryant card, I am again drawn to the shape of his mouth.  That combined with the angle his hand is bent the moment the picture was taken just leaves me with one word: awkward.  It’s hard to actually criticize anything Bryant does on the field, but it’s so strange that both of his Inception cards are just flat out less than flattering.  At least his signature remained obviously the same over the year.

It does not honestly matter what I think or feel about these two cards…I have two Kris Bryant autographed cards!  That’s more than I will ever have of Mike Trout and Bryce Harper, possibly combined!

One of my favorite parts of the year is the weeks leading up to the beginning of baseball season.  That’s when there are many articles - in magazines like Sports Illustrated or the many other websites with baseball content - that are geared toward getting people excited about the new season when there are no games to report on.  That’s when you start seeing profile pieces about big name players.

I remember a few years ago, there was a great article in Sports Illustrated about Mike Trout.  Up that point I did not know much about the Mellville Meteor, but that article served to make me a fan of his (even if I cannot afford to buy even one autograph it seems).  The same happened at the beginning of this year with Kris Bryant.

The article I am referencing was written by Tom Verducci and can be found following this link: https://www.si.com/mlb/2017/03/21/kris-bryant-chicago-cubs-born-win

I don’t want to take credit for Verducci’s writing, but I do want to highlight some things about Bryant that he wrote about.

One of the first paragraphs that Verducci writes states the following:

It is true that he earned all A’s in elementary, middle and high schools with the exception of one B—the result of an 89 average in high school precalculus. Such smarts earned Bryant the No. 2 academic ranking in his graduating class, which carried the honor of speaking at graduation as the salutatorian. Bryant instead yielded that honor to a classmate with a similar GPA, because he wanted her to have the recognition.

I laughed when I read that because a) I was the valedictorian in my high school class but did not give up that spot.  In fact, I transferred from Calculus to Statistics to give myself a better chance at securing the sport in the final 9 weeks that grades counted (don’t tell anyone from high school that though!).  Bryant beat me in total number of Bs in high school though; I had two to his one.  In the great scorecard of life, I guess I will cede that one to Kris.

It is also true that two months after he secured the last out to clinch the Holy Grail of sports championships, Bryant, 25, married his high school sweetheart, a girl he met in freshman English class.

Not surprisingly, I met my high-school-sweetheart-turned-wife in English class in high school too!  So we can call that one a tie (though I bet he did not date her his freshman year like I did with my wife).  I did, however, get married to my sweetheart at an earlier age, so I will take that point.

True, too, is that Bryant does not smoke, drink or use profanity. The Cubs have been known to toast victories in their postgame “party room” at Wrigley Field with shots of whiskey. A clubhouse attendant fills Bryant’s shot glass with apple juice. “Guys,” Bryant told his teammates midway through last season, “let’s win the World Series. And when we do, I’ll have my first sip of alcohol.”

About an hour after Chicago won Game 7 of the World Series, with most of the Cubs wearing only a bit more champagne and beer than they drank, first baseman Anthony Rizzo stood next to a refrigerator in the clubhouse when a thought suddenly occurred to him.

I bring this up about Bryant not to make any sort of statement about the behaviors he does not participate in, but the type of person it takes to stand up in the face of immense peer pressure.  In high school, I was known as the guy on my teams who did not do those things that other high school guys did.  It became a running joke to try and get me to cuss.  Even during film sessions after football games, coaches would turn and ask me if I cussed when I made a play or had a play made on me.  At the time I thought it was funny.  But looking back I think about dynamics of making choices to be different than other people.  I respect Bryant a lot for his choices.

As for the truth of what really happened that night after Game 7, let Bryant explain:

“We win the World Series and...” he says, pausing for effect, “I still didn’t do it. I didn’t keep up my end of the bargain.

There are a lot of ways you can interpret that choice, and I’ll let you make up your mind on that.  I, for one, am very impressed with Kris Bryant the person, possibly more so than the ballplayer.


Check them out on Facebook and eBay!
Posted by JakeSchornick at 9:14 AM